Halong Bay is breathtakingly beautiful. It is, hands down, the most awe inspiring and serene place I have ever seen. You can see why people flock here to cruise this archipelago of over 1000 tiny islands, which only emerged from the sea about 5 million years ago. Look out for the Frog, the Turtle, and many other inquisitively shaped little mounds in the sea. About a 4 hour drive from Hanoi, any cruise company you choose will collect you from your hotel and take you there.

Where we stayed
As I’ve mentioned in my previous post on Hanoi, the budget for this Vietnamese adventure was mid range. We had a personal recommendation to go with A Class Cruises, and to opt for two nights instead of one. I would definitely uphold this recommendation, as I imagine the one night would have felt quite rushed. There are many options of cabin type, all carrying different price tags, but really there was very little difference between any of the rooms so we were glad we went for a standard cabin.
All food on the cruise is included, and everything we ate was amazing. A huge variety of dishes served, mainly an array of fresh seafood, cooked Vietnamese style. So amazing that I had eaten it all before it even occurred to me to take any pictures, so I will leave this part to the imagination.

A 3 day, 2 night cruise including all meals and activities cost £173 per person.

What we did
Day 1
We got to the boat around 12.30, via a smaller taxi boat that takes you from the harbour. There’s a lot of jumping (or stepping really, I exaggerate) from boat to boat; all very fun. And, unbeknownst to us, a good warm up for the nautical perils that were to ensue on Monkey Island (watch out for this post very soon). Day 1 involved kayaking, a visit to the beach, and taking in the sea air on deck. The beach was probably a low point of the cruise. Small, artificial, jam packed full of tourists and full of bricks, concrete, and the grind of construction, it was a telling sign of what is to come in Halong Bay. If you are thinking of going, go soon, as the times they are a changing.

Day 2
This day could not have been more perfect. Probably the best of the whole trip. If you opt for the 2 nights, you are taken to a day boat to spend the day cruising further. And, as a stroke of logistical luck would have it, we were the only people in our party doing the two nights, meaning we had the whole cruiser to ourselves for the day! I imagine the propensity for this happening is probably quite high, as few people seem to do the two nights. We visited a pearl farm, more kayaking, and jumped off the boat into the warm, tropical waters. 70% of oysters farmed for pearls do not produce one, so it would seem that we were again lucky when we chose this akoya oyster to cut open, and this pretty little thing was revealed.

There was no opportunity to eat any oysters at the farm, but we did eat them on the boat – grilled, with a lot of garlic. A world away from eating them on ice with lemon and Tabasco, but still very tasty. 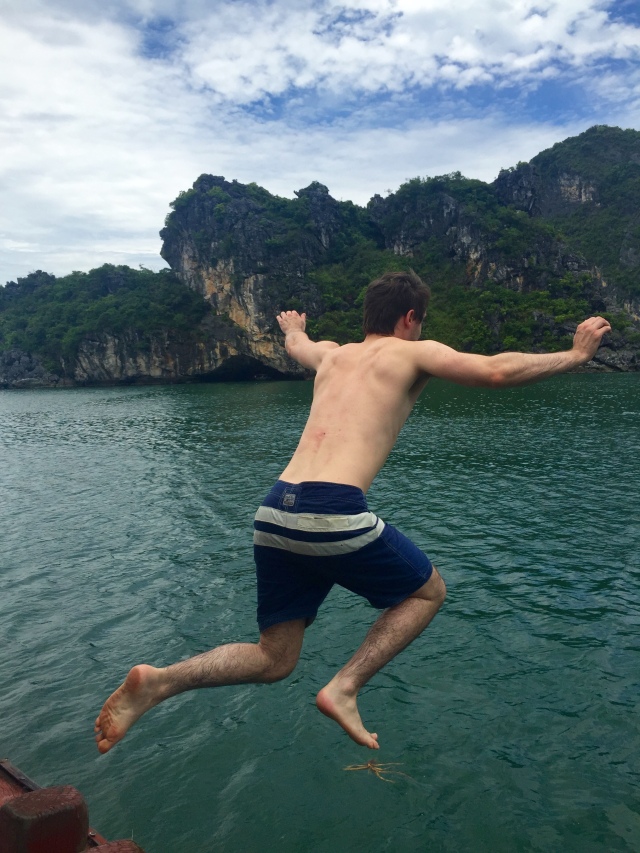 However, the best bit about having the boat to ourselves was having the local guide to ourselves. She told us more about the development of Halong Bay, and how the fishing communities of floating houses that have always lived and worked here are now all but a thing of the past. Just last month, the government ordered that floating villages in the Bay were no longer allowed, owing to it being a site of outstanding natural beauty, and moved the villagers into houses on the mainland. They are still allowed to live on the Bay in their fishing boats, but they can’t stay in one place too long, and will be moved on.
She told us how she had met her husband on a floating village, whilst working as a tour guide and commuting from the mainland. She recounted it like a gorgeous little love story. They’re OK as they have been given a place to live by the government, but she is scared for him riding his moped on the mainland, as he’s been thrown in there after a quiet life at sea. More evidence of the changing times; get to Halong, and get there fast!

Day 3
We visited a ‘surprise cave’ of stalactites and stalagmites. I wouldn’t say there was a great deal that was surprising about it, particularly as I’m from Yorkshire and spent many a childhood Saturday falling over in the caves at Castleton (‘have you got your slippy shoes on today’ was apparently what I was obsessed with asking people as they stacked it. I digress). If there was anything that was a slight surprise it was that one particular formation that looked uncannily like, well, the penis of a guy who is very very happy to see you, had been lit with a warm, red, glow. Te he. Clearly the people designing the lighting in here had a sense of humour and a love of all things phallic. Then, it was back to the boat for another exceptional lunch and back to the marina to make our way to Cat Ba Island. 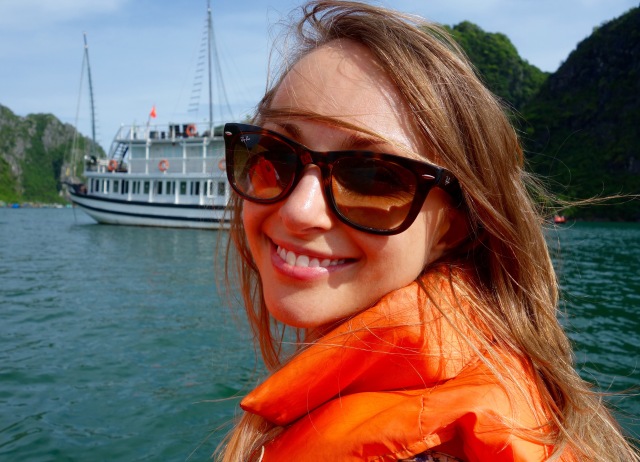 Halong is busy. It’s a well oiled machine that is only picking up pace. But, despite all that, it will charm your socks off.

Next up, peril on the high seas on Monkey Island. Watch this space!