So, it seems incredibly fitting that this first post should be about festivals – Secret Garden Party to be precise. 8 days and counting! But let’s have a bit of background first.. My love affair with festivals began in 2004. I was 17 and armed only with a bikini top, pumps (wellies, what wellies?!) and a bottle of vodka, and I was on the train to Creamfields. What could possibly go wrong? Well, nothing, it transpires. Chemical brothers, laser light show, and the accommodating shoulders of a guy in the crowd… First festival moment – check! I remember thinking it was the pinnacle of my life to date….

Since this, I have been to many many a festival, including a fair few trips to Glastonbury. But in a break with tradition, my friends and I decided to go to Secret Garden Party this year. I was lured by the prospect of a magical stage on a Lake, fireworks over the SGP shipwreck, Badger Woods (where mysterious animals lurk in the dark, and your shamanic journey awaits you), a paint fight, a mud fight, more art and dance than I will possibly get to see in one weekend… and I haven’t even got to the line-up yet!

The line up includes Fat Freddy’s Drop, Little Dragon, Hercules and Love Affair, Public Enemy, and motown queens Martha and the Vandellas!  And just like she said, it’s set to be a LIKE A HEATWAVE!! Wowsers. I have seen Fat Freddy’s drop before, when they came to the Plug in Sheffield on their Blackbird tour in 2012. They played for 3 hours without a single break in the music, an incredible sound, and their half naked dancing trumpet player was hilarous – 100% one to watch.  I have also seen Little Dragon before, on the West Holts stage at Glastonbury (year remains ambiguous, but I’m going for 2011? 2013?), and she was a floaty, soulful treat. Her new album, Nabuma Rubberband, is getting a hammering from me at the moment. Pretty Girls in particular; beautiful and wistful, it’s a perfect daydreaming soundtrack.

So this year’s theme at SGP is ‘Goodbye Yellow Brick Road’, and the festival does advise that it is a Serious Party. It is for all who are ‘sickened by commercial gigolos and the false promise of fame and fortune achievable only through wearing the right deodorant’. Very serious indeed, but the sentiment is no doubt a good one; happiness and quality of life over monetary trappings and commercial success.  So, along this vein, some of my lovely glittery friends and I thought we would denounce the dogs of society by embracing our inner hippies, and learn to tie dye. And, since I am kimono crazy at the moment, what better piece to make? Yes, that’s right. We made TIE DYE KIMONOS. And it was very exciting.

We bought a huge ream of cotton fabric, and made the pattern by draping it over our shoulders, pinching to make the kimono sleeve, and cutting ergonomically.

We then soaked all of the pieces of fabric in a salt water solution (this helps the dye take to the fabric), pinched in the middle and made into a swirl shape – like a cinnamon swirl bun. There are lots of other patterns you can make, but we thought this one was extra pretty. 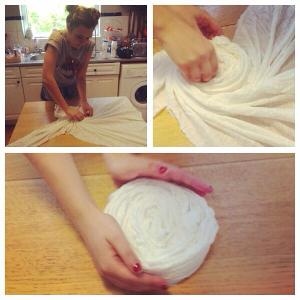 We bound the swirls with elastic bands, mixed our Dylon fabric dye up as per the instructions, and decanted into big takeaway sauce bottles (which, it just so happens, we found in the first shop we went to in Walthamstow centre!)

Then it was the fun part. We made a makeshift wire rack, and got tie dying. It goes everywhere, and was very hard to keep the different colours of dye within different sections. I definitely panicked about it not being very neat, but it soon became apparent there was no controlling the dye. If in doubt, just add more; generally my motto in life anyway. We figured you couldn’t go wrong with tie dye. And we were right! 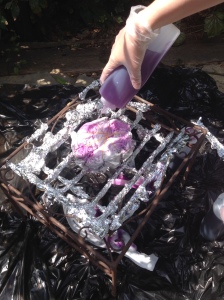 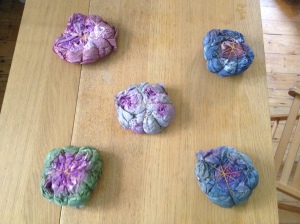 Then, we put them into bin liners and waited. Some sources said you could leave them as little as 15 minutes, some said 24 hours. We weren’t sure but figured it couldn’t hurt to leave them for longer, so gave it the full 24 hours. 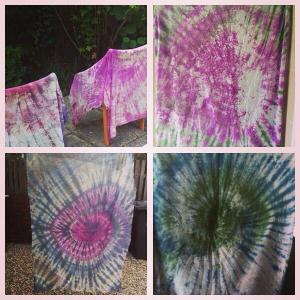 After the 24 hours was up, we rinsed them with cold water in the shower, and then washed on a cold hand wash cycle with just a little bit of detergent. Very very happy with the results!

One thought on “Secret Garden Party – Kimonos, Dragons and lots of Tie Dye”